The Data Theft You Never Hear About

Cybercriminals are constantly searching for vulnerabilities that allow them to steal data from your organization. And, the true scale of this will shock you.

Cybersecurity is a hot topic in technology circles, and for a very good reason. As it turns out, 2016 was a banner year for cybercriminals, with over 4 billion records stolen and 4,149 confirmed security breaches. The importance of proper IT security measures increases as these numbers continue to climb each year. 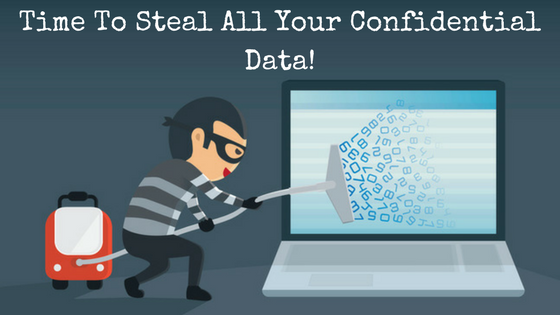 Businesses, government agencies and medical institutions were the key targets for data theft, and represented more than half of all breaches globally. As frightening as these numbers are, they still don’t reveal the total breadth of cybercrime or its impact. With the U.S. representing nearly half of all data breaches, it’s time to implement security measures that can prevent or minimize your chances of being victimized.

More Sophisticated Attacks Are on The Rise.

Malicious attacks are on the rise, and hackers are using more sophisticated tools. Many cyberattacks are never discovered, and negatively impact organizations for years.

Others are blatantly obvious, such as the massive malware infiltration of over 1,175 Holiday Inn hotels. This resulted in compromised credit card information for an unknown number of individuals. While the data breach at Holiday Inn was discovered in 2016, it wasn’t until nearly six months later that the malware was erased. In this particular case, credit card data was stolen and used fraudulently in CNP (card-not-present) purchasing.

This particular type of credit card fraud is on the rise, and it’s costing businesses and banks a significant percentage of their revenue every year. While past breaches have been more opportunistic, the precision and sophistication of today’s coordinated attacks have never been so rampant—And, they’re still increasing.

A data breach occurs when the name of an individual, plus their uniquely identifiable information (such as Social Security number, medical or financial records, driver’s license or other private data) is put at risk due to exposure via paper or digital format. Lesser forms of data breaches are the penetration and exposure of information such as passwords, email addresses and user names, which may or may not involve sensitive personal information.

Some other types of data breaches include:

While these are considered the main types of data breaches, a few others are notable such as subcontractor breaches, or those that cross the boundaries of the categories above. Any of these could ultimately lead to identity theft and/or fraudulent financial transactions.

Security Spending Is on the Rise.

As technology teams actively look for ways to protect their organizations, the options can range from added upfront and endpoint security, and faster notifications in the event of a breach, to security training for employees to ensure compliance with regulations.

IT security spending is expected to rise from $68.2 billion to $73.7 billion worldwide in 2017. Even with the tough stance that companies are taking against hackers, industry professionals estimate that only a small portion of data breaches will be visible.

Reports such as the weekly Identity Theft Resource Center’s Data Breach Report, reveals data breaches listed on the websites of state regulators.  However, this still doesn’t capture the full scope of data breaches.

Security begins with ensuring that people, processes and technology are all aligned and laser-focused on a protected environment. Large organizations are especially challenged, as they’ll have years of business logic to unravel in some instances.

Experts recommend that organizations make security a priority.  This goes for all sizes of businesses. In fact, small to medium-sized businesses are ideal targets as they often lack the forward-thinking security measures that are prevalent in enterprise-scale corporations. Fortunately, there are security options for all types and sizes of organizations.  However, assuring data security isn’t a one-size-fits-all approach.

Contact Steadfast Solutions in Melbourne & Brisbane to learn how to protect your organization from data breaches. You can reach us at 1300 739_ 335 or hello@steadfastsolutions.com.au. Our IT Security Experts can implement solutions that will proactively guard against data theft.